I grew up a fan of the Teenage Mutant Ninja Turtles, as did a lot of kids in my generation. The lack of good games to play was a near-constant disappointment, except for the stellar arcade games that came out in the early ’90s. But my brother and I enjoyed playing board games from an early age. And the offerings from TMNT sucked. We had the Pizza Power game, but it’s an incomprehensible, unplayable mess.

Sometime in 2015, though, I caught wind of a TMNT RPG-style game in the works, designed by Kevin Wilson. Then we saw the Kickstarter for it around this time last year. We received it in autumn, and we’ve been checking it out ever since. Also, we’ve been slowly (SO SLOWLY) getting the whole game painted. So stop dusting the house! It’s time to get into some turtles! 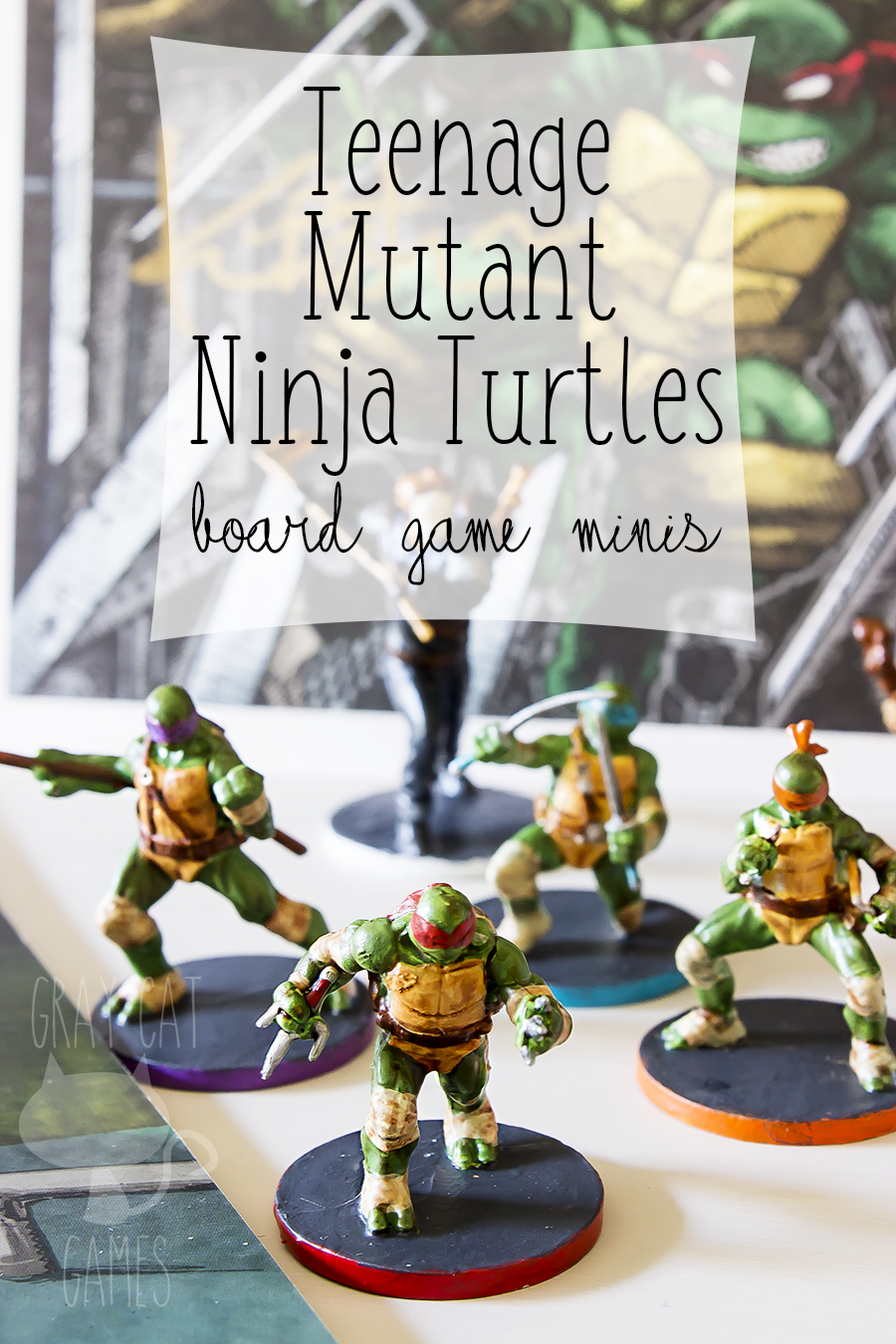 Teenage Mutant Ninja Turtles: Shadows of the Past is, first and foremost, a mouthful. It’s also a miniatures game in similar style to Descent or Star Wars: Imperial Assault. One player acts as an “overlord” commanding the bad guys, and the other players each take on one of the turtles. We decided to Kickstart The Works edition which promised a ton of extra goodies. This is what we saw when the game finally arrived: 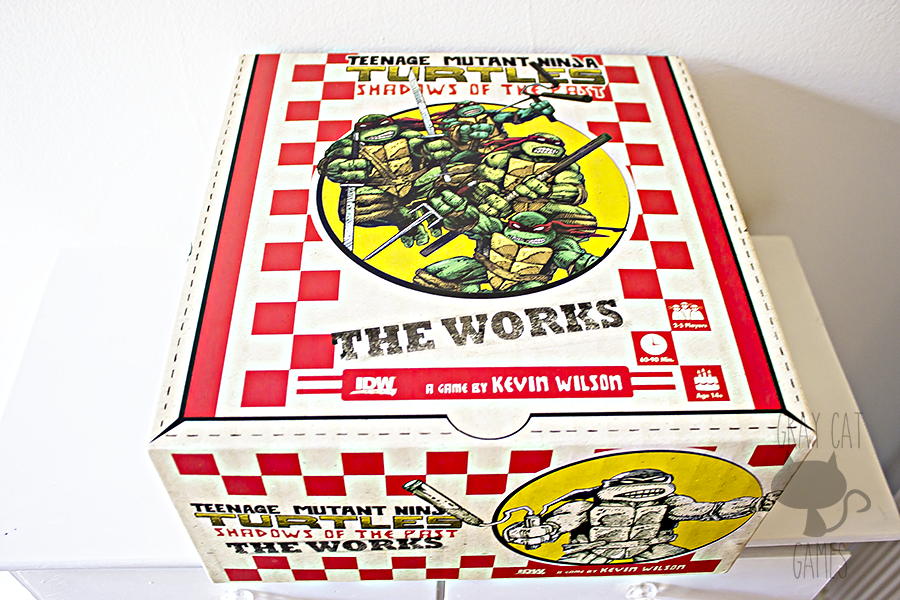 As you can see, it’s a facsimile of a pizza box, but cartoonishly larger than any pizza box you’ve ever seen. I’m pretty sure it’s the biggest box in our growing board game collection. And it’s stuffed. The exclusive materials we got were these gorgeous lithographs: 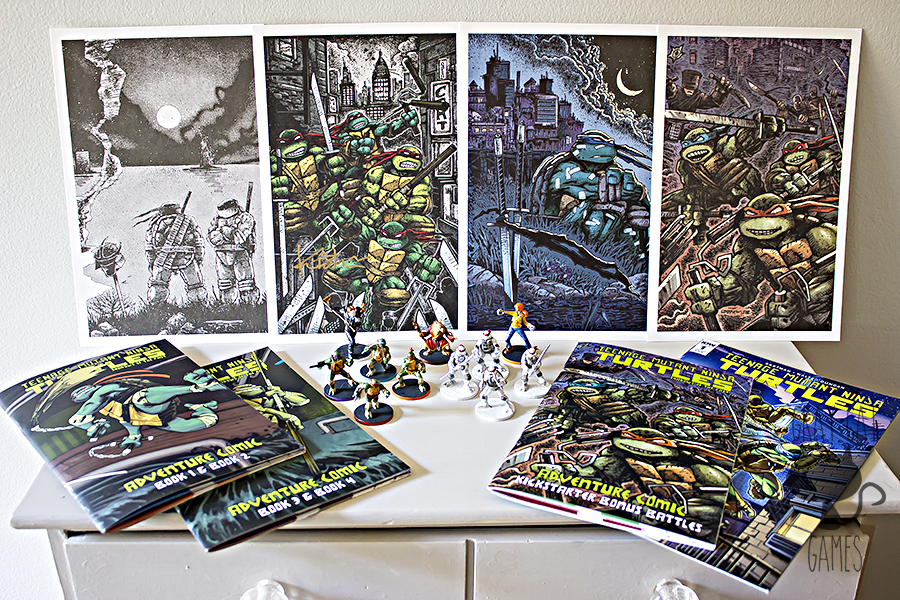 This was actually a big reason I liked the way IDW did this kickstarter. Unlike most of the Cool Mini or Not miniature extravaganzas, none of the exclusive stuff we got was essential to the game itself. We got extra art. We got the cool box. We got some early access content that won’t be available at retail just yet. As you can see if you squint, Splinter, Casey Jones, and April O’Neil are present and accounted for! These characters will be available later in mini expansions, just like they did with Imperial Assault.

The great thing about this approach is that it speaks to the way IDW intends to support the game, with continuing content. The Casey, April, and Splinter packs are coming for sure, and they’ll be releasing a big expansion called City Fall, which is supposed to add more scenarios as well as a way to play the game fully cooperatively. (As it stands, you play the game was 1 person playing the bad guys 1-4 other people playing cooperatively as the Turtles.) 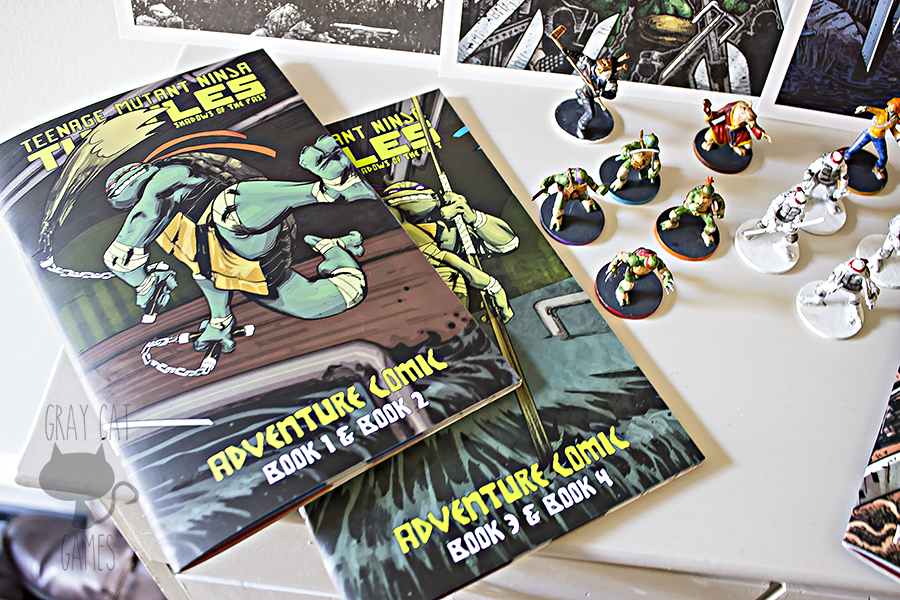 The scenarios are described in “comic books,” which I think is an excellent way to convey the information. It definitely plays into the charm of the game. 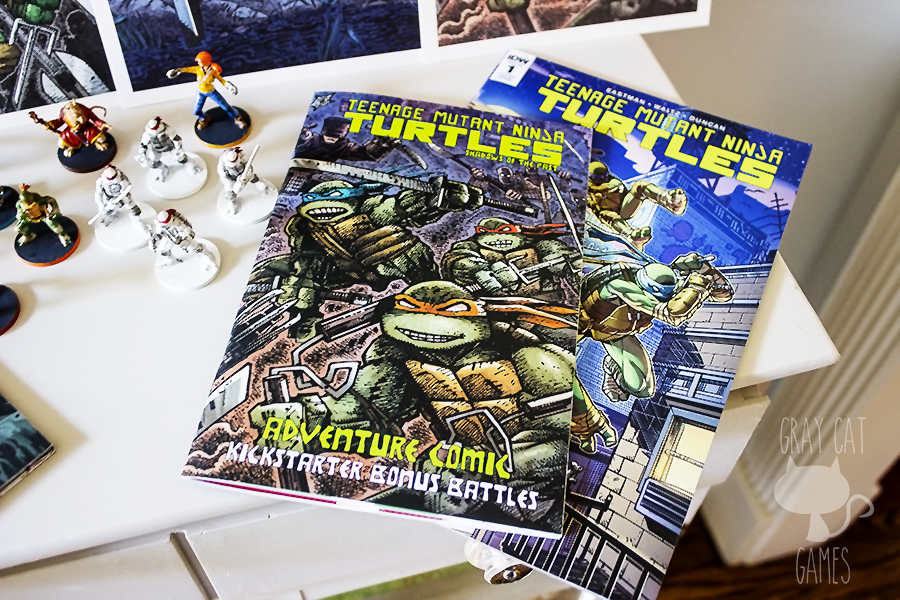 As part of the Kickstarter, we also got a small batch of exclusive scenarios. They tend toward the simple or the experimental, like one cooperative scenario where 4 players work together to destroy as many mousers as possible. It’s not essential by any stretch, but it was very cool to get some more content. 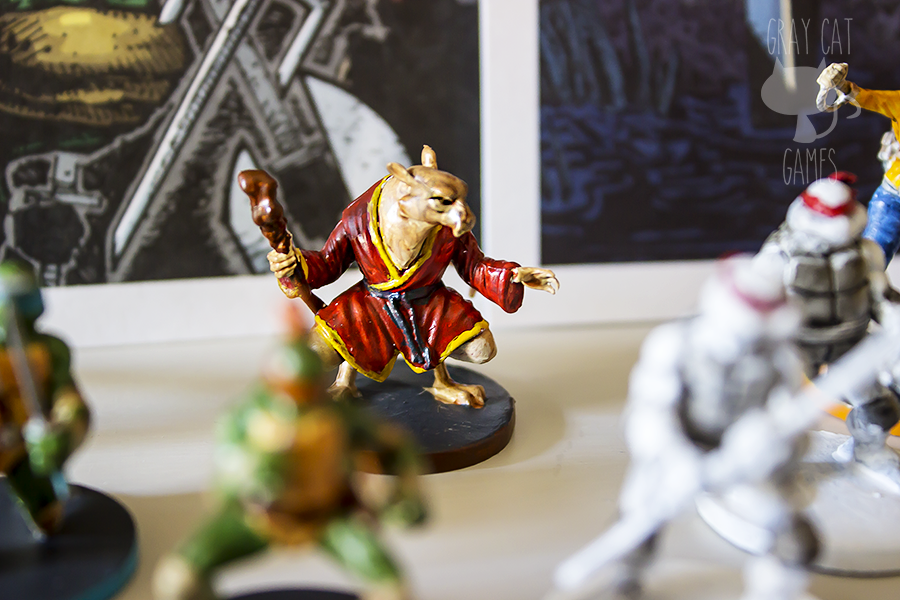 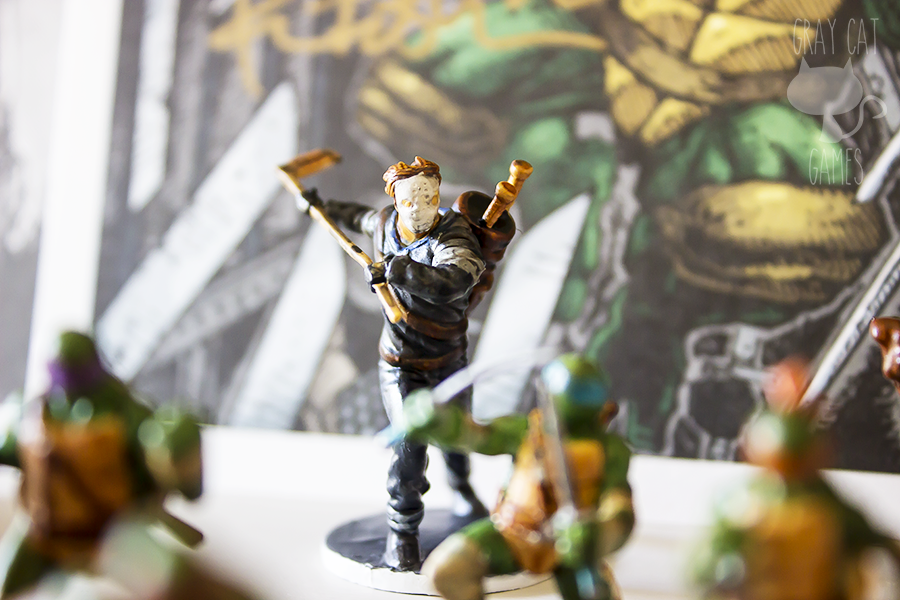 At this point, we’ve gotten about half of the game painted, with the help of a friend. I’m not an expert painter by any stretch, and these were in fact my first try at it. I find that a bit of color, even if there are imperfections, can really make these miniature games come to life and be more fun. 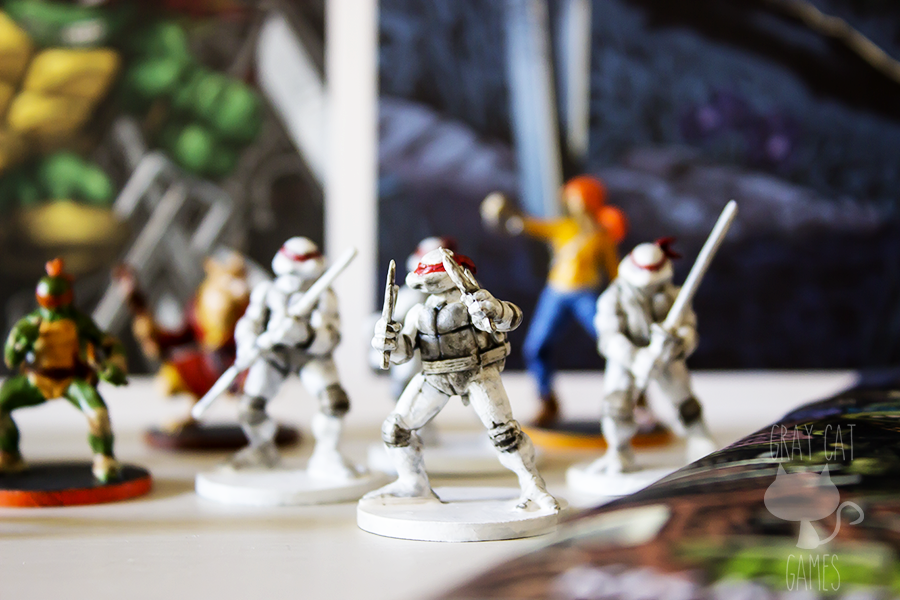 Here is probably the only big reason why I personally wanted to put up the extra 60 bucks for The Works edition (though it’s more expensive now that it’s out of Kickstarter). In addition to the standard sculpts of the turtles themselves (based off the current IDW comics run), we received the “Eastman” sculpts, based off the original comic books and television show. I like the new look of the turtles just fine, but my heart is definitely in the old school! We got some inspiration from others who were taking a sort of high-contrast black/white look with the original all-red bandanas, which confused the heck out of me as a kid when I saw things like the old NES video game. 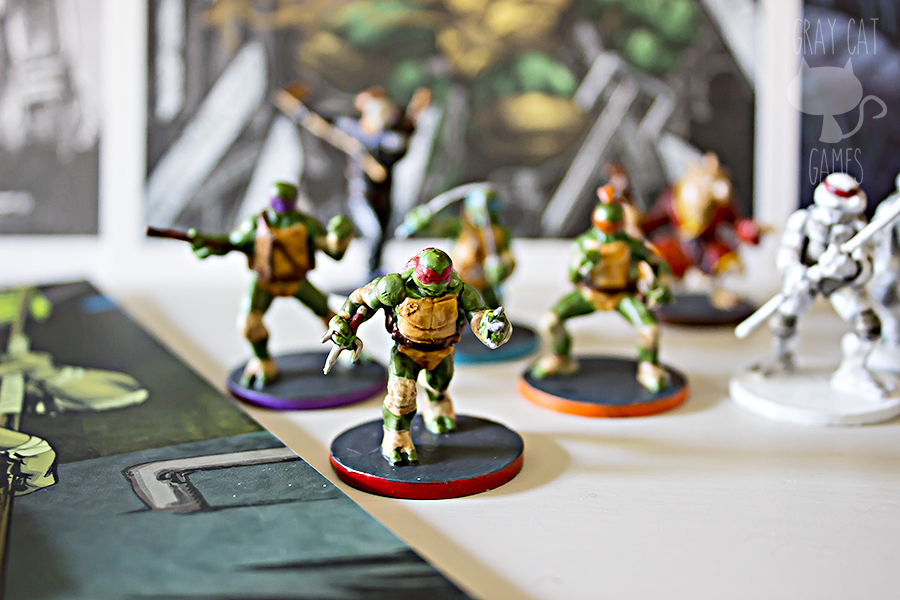 But I’m really glad we got the retail minis, as well, since I just adore the red, blue, orange, purple color schemes of the turtles. It took a lot of work, but we got these looking beautiful. 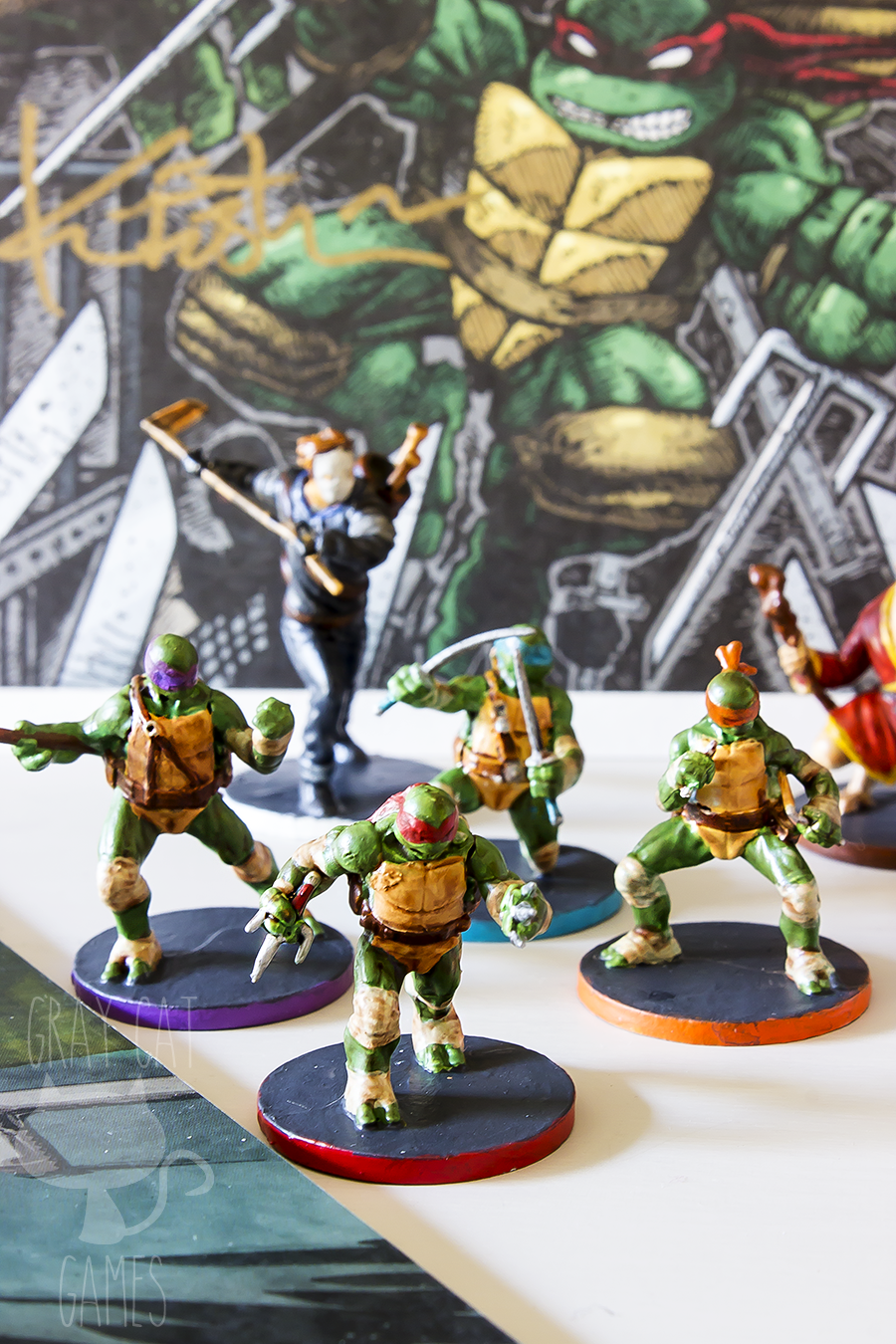 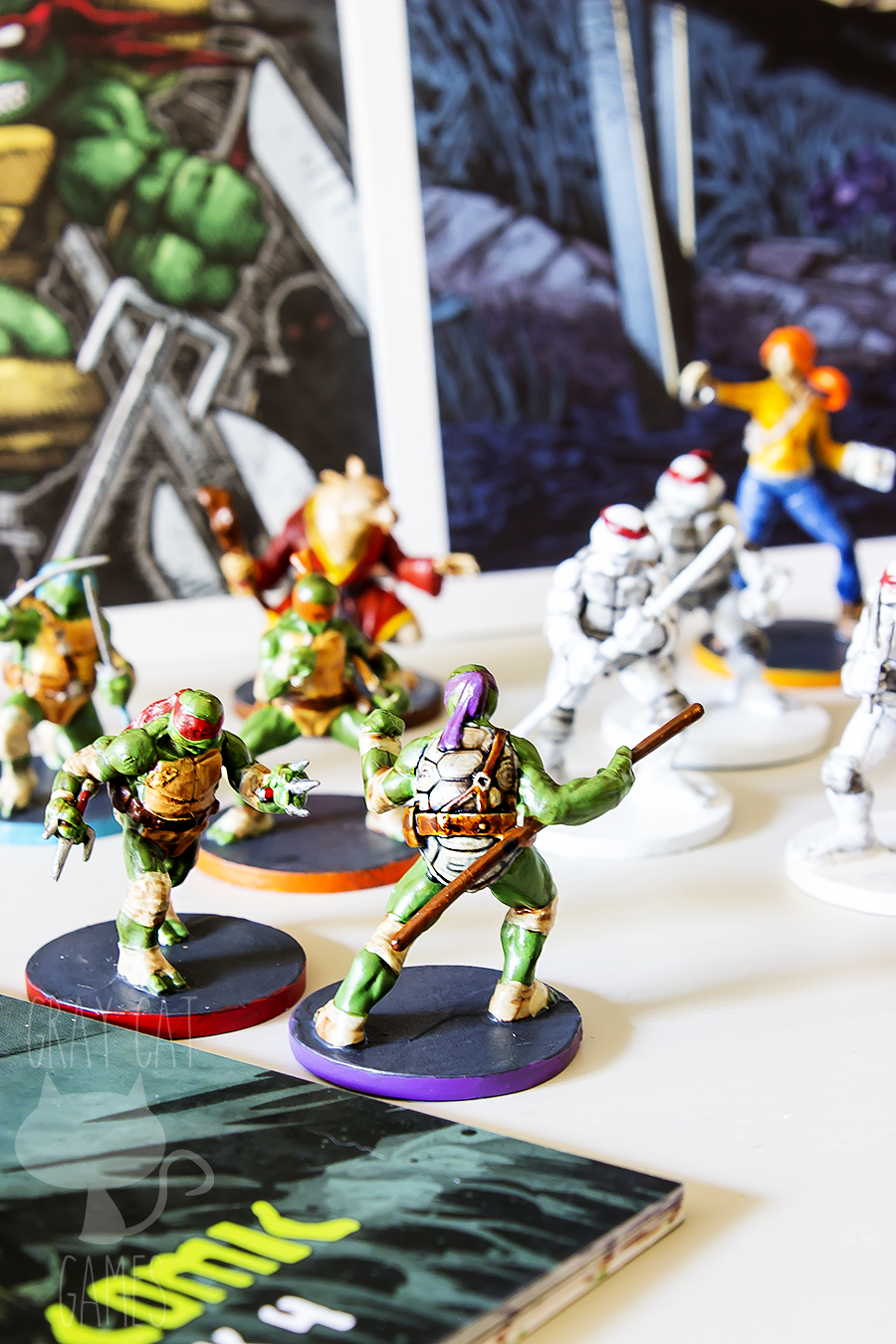 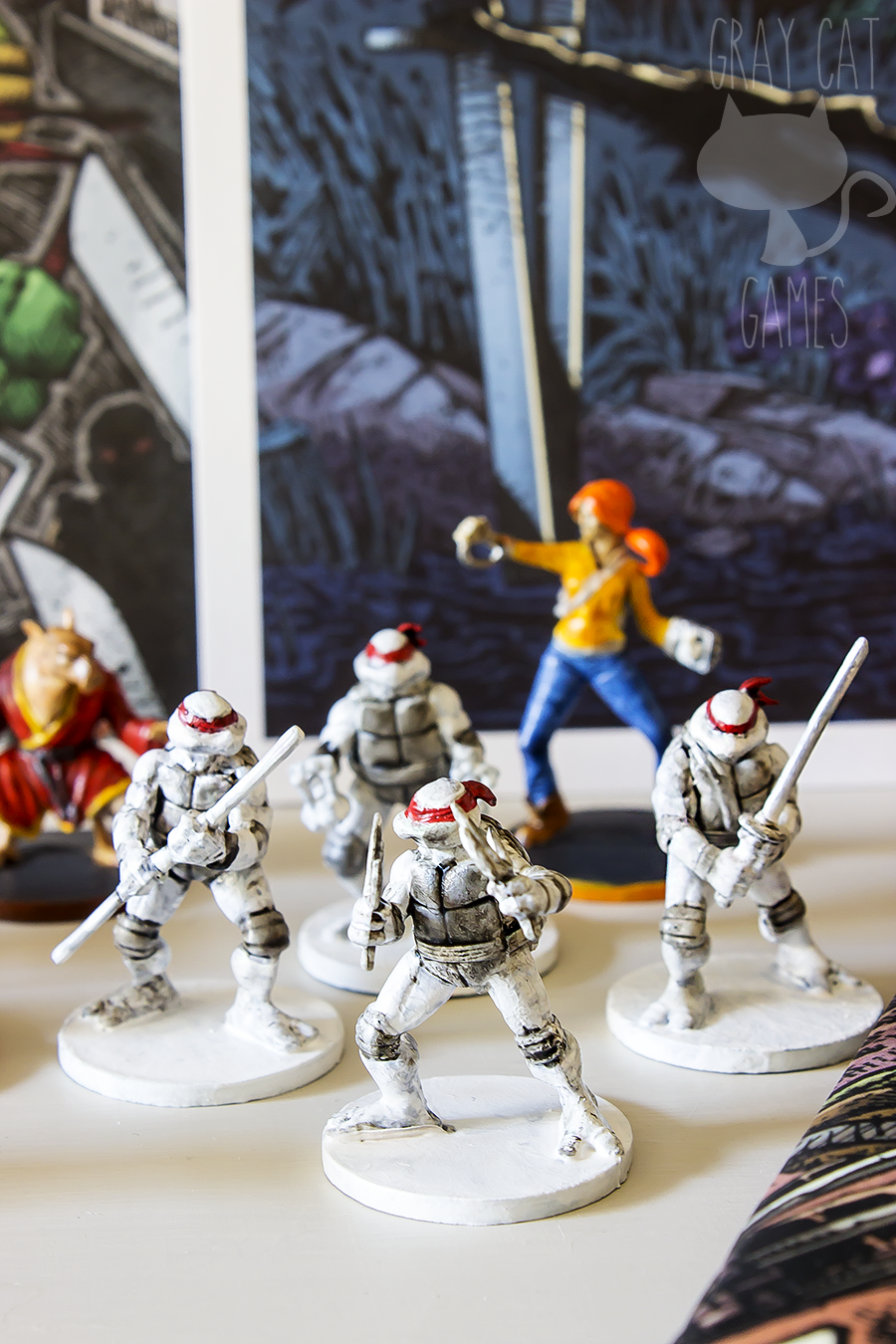 So these are a few of the paint jobs we’ve gotten done. In the near future, I’ll be showing some more of our painting projects off, along with some impressions of the game. So far, it’s been really well received by the board gaming community, with Tom Vasel putting it as an early contender for his top ten games of 2017! I have to say I agree with this assessment, as so far I’ve found it to be a blast. But more on that later.

If you’ve gotten your hands on a copy and want to show us your awesome mini paintings, go to our Facebook page and post them to our wall! We’d love to see what you’ve all done! (In fact, do this with minis in general. We love drooling over other people’s paint jobs.)