Going to a restaurant hungry can make the wait for food feel like YEARS. And if you have hungry kids? It’s even worse. Keep one or two of these board games in your bag or pocket to stave off hangry kids (or spouses) and keep your sanity.

Have you ever gone to a restaurant and wished you had something to do while you waited for your food? We’ve started making it a habit of taking games with us. Especially when more people tag along. Games are great for passing time or for stimulating casual conversation.

But what games are restaurant-friendly?

To maximize fun and minimize distraction in a restaurant, the game must fit these criteria:

Now that we’ve set the rules for what games are restaurant-friendly, let’s dive in! 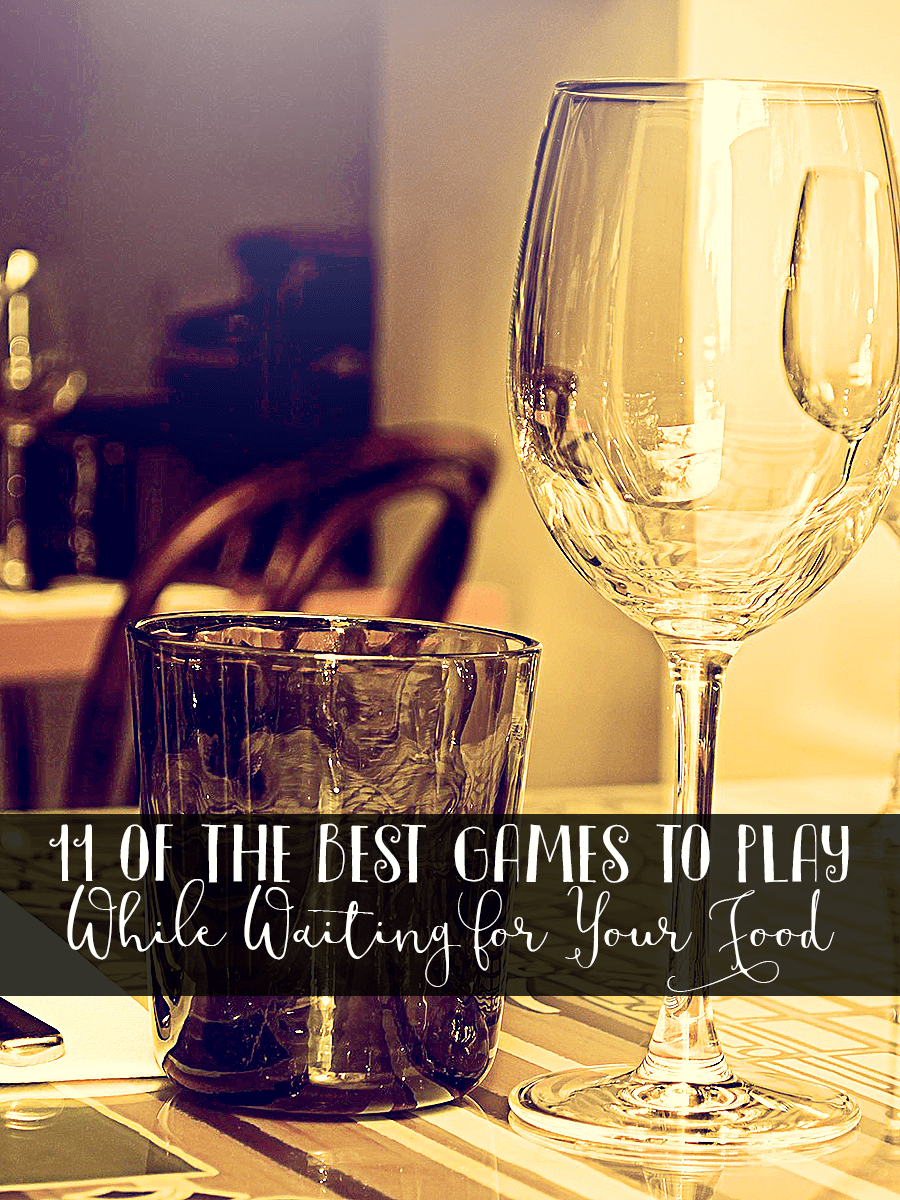 This is the PERFECT restaurant game. It comes in a pouch that fits easily in your pocket. It’s quick to set up (pass out a card to each player. Done!). It’s quick to tear down (stuff everything back in the pouch. Done!). Rounds are incredibly short. You can stop the game at any time. You can even continue the game while you enjoy your meal if you’re really invested.

There are also TONS of versions of it. Like:

This is my second go-to for restaurant games. Like Love Letter, it’s quick to set up and tear down. Rounds are short, though they can sometimes last longer than you’d hope. Especially if you’re playing with someone who gets analysis paralysis easily. But also like Love Letter, you can put it down at any time or continue playing through your meal.

The box is small and could fit into the pockets of most men’s jeans (but not women’s because the fashion industry hates us and keeps giving us fake pockets. FAKE POCKETS).

For more information about Coup, check out our review.

Zach loves this game. It took me a couple times to enjoy it, but it’s actually pretty interesting! It breaks the “no dice” rule, but that’s because you never actually roll the dice. Your goal is to win points by winning dice. The number of points you get can fluctuate depending on the number of the die (which other people can control).

It takes up very little space. It’s just a stack of cards and a tiny board.

If you’re playing with people who know what they’re doing, it can be a quick game. It’s not as portable as the previous games on this list, but it’s still easy to smuggle into a restaurant unnoticed. 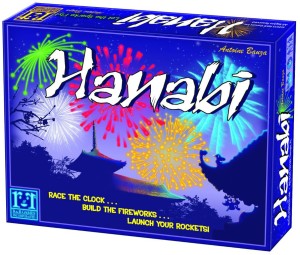 As much as I love the tile version of this game, it’s the card version you’re going to want. The tiles are a bit loud when you shuffle them, they take up too much space, and they take longer to clean up.

The card game can easily fit in your pocket and is easier to shuffle and clean up.

We’ve written about Hanabi before, so I won’t bore you with the details of the game. It’s a great little restaurant game, though!

Sushi Go is just a quick little pick-and-pass game. It’s small (as long as you don’t get Sushi Go Party), and doesn’t take up much room at a table. But it does require some extra clean up after. The cards have to be organized into specific groups. But because it’s such a small game, it doesn’t take too long to organize.

The only extra thing you’ll need (not provided in the game) is a pen and some paper, to keep score.

If you can find a copy of the game that comes in a regular box and not the heavy, metal box, I would recommend it. A normal box would make it easier to travel with. But the metal box just isn’t that great. The lid comes off too easily and cards wind up all over the place. While the metal box was attention-grabbing (for us, it’s how we discovered the game), it’s not that great. 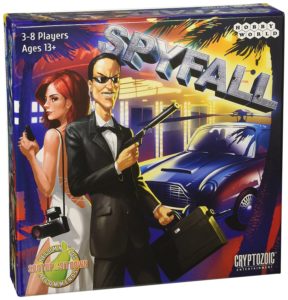 I wrote briefly about Spyfall in 12 Party Games for the Holidays, but it deserves mentioning again.

This game is SO easy to set up, put away, and it takes up virtually no room on the table. But, while it CAN play only 3 people, it’s best if you have more. This is a great game for larger parties. Though it’s also good if you want just a few quick rounds of something.

This game is a lot like Coup, and it takes up as much room. As with many games on this list, it’s easy to clean up. But it does take a bit longer to set up because there are guidelines to which characters to play when you have X number of players. That said, it doesn’t take THAT long (finding that bit in the rulebook is what takes forever).

The only thing that makes me hesitate to play this is if you have a large table. There’s one character whose job it is to switch any 2 characters at the table. It’s may disturb other diners if one person is getting up all the time. But if you either don’t play that role, or the person with that role uses common sense with it (and only takes cards from the people close to them), it will be fine.

This was another game mentioned in 12 Party Games for the Holidays if you’d like to read more about the game itself. 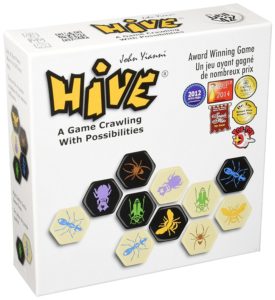 This game is small enough on its own. But now, for easier smuggling, there’s Pocket Hive!

Hive is a fun little tile-placement game, and feels very much like chess. Except it comes in a much smaller package. It’s very quick and simple to pick up on. It maintains a lot of chess-like strategy, but it doesn’t overwhelm you with options. It only plays 2 people, though.

Good Cop Bad Cop is a lot like Spyfall. You have to figure out who is on your team and who you need to “kill.”

As with Spyfall, it’s better with more people. So it’s one to take if you have a larger group. However, it also has a little more cleanup to it. Because you have cards you can collect throughout the game, and you have multiple cards sitting in front of you to help hide your identity as people try to force you to reveal your hand. 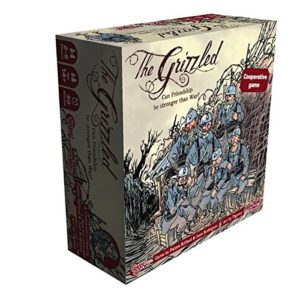 This is a cooperative game where the goal is to survive with your team of WWI soldiers. It’s very difficult but quicker than a lot of similar games. This is one for when you know the wait is going to be longer than normal.

Players work together, deciding how much they want to push their luck. You can go through more cards or fewer cards, but all cards have to get played.

This game is small enough to play at a restaurant, but the box is bigger than what can fit into your pocket. But it is still easy to smuggle in. Set up and tear down are pretty simple, as well. 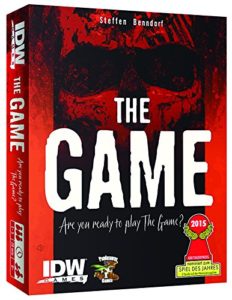 Despite the fact that it has such a stupid name making it near impossible to search for it, The Game is one of our favorites! I can’t believe neither of us has ever mentioned it before!

It’s not always short, it depends on how fast your group can play. But it has never lasted more than 30 minutes for us.

It’s easy to teach and learn, but difficult to master. Set up is easy, tear down is easier, and can fit somewhat comfortably in your pocket.

If you want to read about it on Board Game Geek, but you’re having trouble find it…I understand. And I found it for you. You can see the forum thread here!

A lot of people like this game. Which is why I hesitate to admit that I really don’t. It seems like the reason people like it isn’t because it’s a good game, but because of the novelty. I enjoyed it the first time I played because the jokes were new. After that? It seemed pretty old hat for me.

But that’s just me. LOTS of people like it and play it over and over again. Which is why I’ve added it to the list. Not because I recommend buying a copy. I DO recommend checking out the reviews and seeing if it’s something you would enjoy.

You might want the normal deck, rather than the NSFW deck, if you plan to play it at a restaurant.

Do you take board games with you to restaurants? What are your favorites? Let me know in the comments!

Solving a Murder: Is Hunt a Killer Worth the Price of Entry?

I think 3 Wishes fits in this category. It’s on par with Love Letter for size. It’s just a little more deep than Love Letter and it can have quick hands.

This is a great list! I may need to check some of these out!

We like Hive (and I bought the mosquito expansion to give as an upcoming birthday gift!) and Exploding Kittens — great list for future purchases.

We haven’t tried the mosquito expansion yet. How do you like it?