Machi Koro is a cartoon-y, cute, fun game that uses dice rolling and card buying in a race to finish a town. It plays really well for 2-4 players and provides a breezy, interesting experience. It’s hard to go wrong with a Spiel des Jahres nominee!

Earlier in 2015, there was a lot of buzz about this great, awesome game that was impossible to find: Machi Koro. I didn’t know anything about it, really, but one day it showed up on our store’s shelf. And our resident board gaming guru said it was a lot of fun.

Never distrust your resident board game guru! For me, the Japanese-style, bright-blue box art did not really attract all that much at first. But I picked the game up, and here we are. 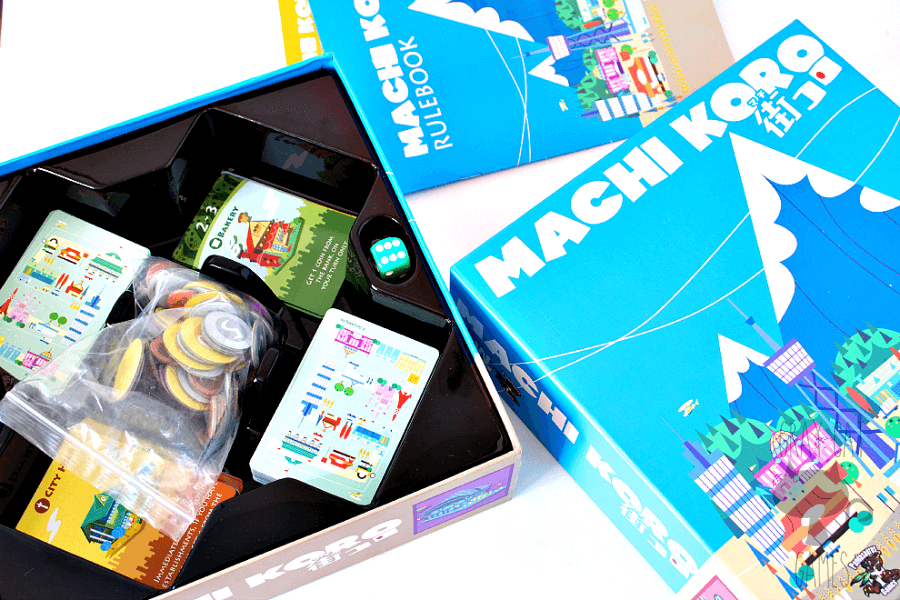 Machi Koro is a pretty standard-sized game box, so it won’t take up an inordinate amount of space. Since it’s mostly just a deck of cards and some tokens, you don’t really NEED the game to take up as much space as it does. But I hear that there is a new version that fixes this issue.

Machi Koro comes with a large deck of cards, two six-sided dice, and a bag of coin tokens. There are definitely quite a few cardboard coins in there to support 4 players.

In the original set? Yes and no. The insert that comes with the game has 4 large containers for cards; unfortunately, the containers don’t really hold the cards that well. The result is that your deck of cards will inevitably be strewn about inside. 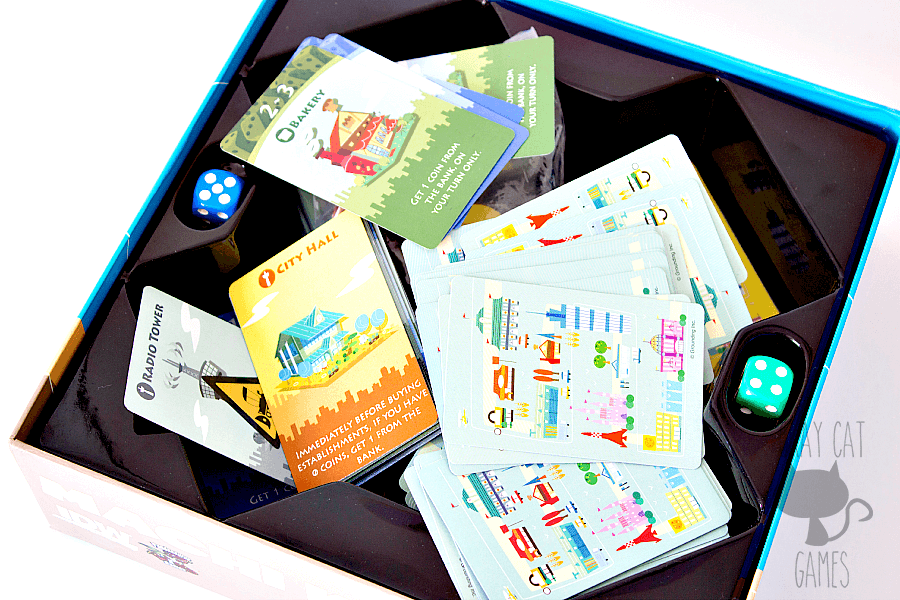 It’s not too big an issue to sort the cards, but it does seem like an unnecessary problem. If the insert had a better design, this would not be a problem, and all in all it feels like it was an insert meant for another game.

The art on the cards is really bright and cheery. I like it a lot! It looks like some kind of kooky anime village or city. The colors are bright, and everything is very easy to read. 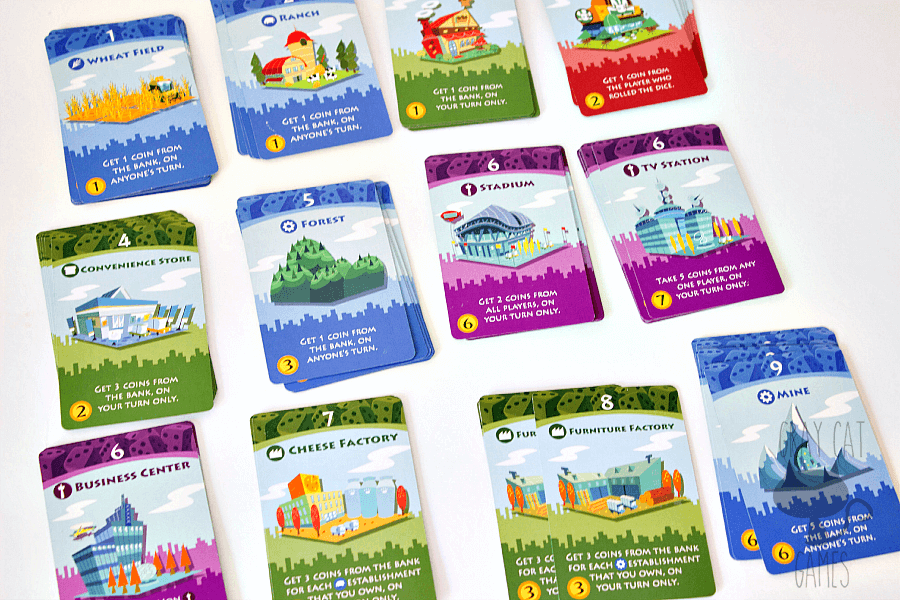 In Machi Koro, your turn consists of three parts:

Many of you will probably recognize this dice-rolling mechanic from Settlers of Catan, and I feel this is an appropriate comparison. In many ways, Machi Koro feels like a light version of Catan. However, the ultimate goal is different. In Machi Koro, you are trying to build your city’s establishments, like the shopping mall and the amusement park. 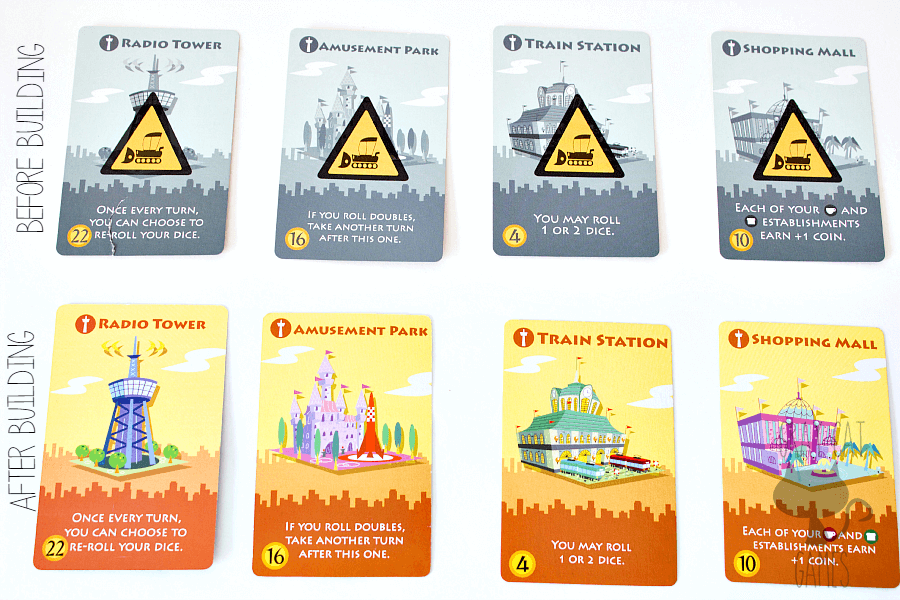 Each establishment gives you a big bonus. For example, the train station lets you start rolling two dice instead of one, which opens up different strategies. The first player to build all of his her or establishments immediately wins the game.

Throughout the game, you will be buying buildings to help you get coins. These cards are arranged in premade stacks that you can purchase from. The cards come in 4 colors: red, blue, green, and purple. Blue cards get you coins no matter who rolls the die, so if I have a forest, I get a coin even if Chelsey rolls a 5. Green buildings, on the other hand, only get you coins on your turn. Red cards steal coins from players if they roll the die on their turn. Purple cards have powerful effects, like stealing 2 coins from each player or swapping a building to screw up someone’s strategy. 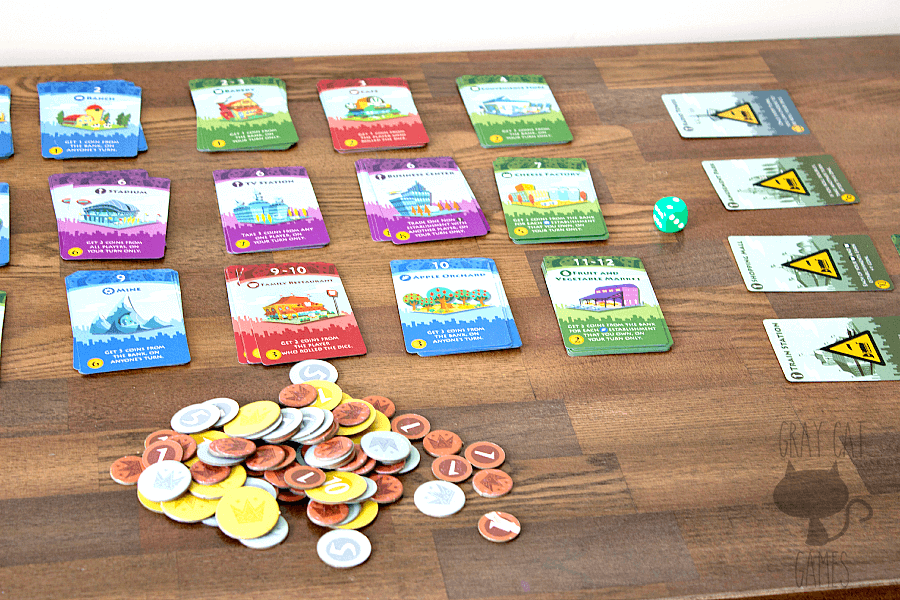 No, aside from rolling dice, you won’t be manipulating very much, and the math involved is very manageable.

I like Machi Koro a lot! It moves at a great pace that starts a bit slow as players are building up. Then as players establish their towns they build momentum. Suddenly, the game is over. I like that the game has a more defined conclusion than Settlers of Catan. It does not drag.

In addition, all the cards that you can buy for your town are out in front of you at the beginning of the game. This means that all the randomness comes from the dice, and you can strategize as much as you want. If you want to go for the red buildings that steal coins from other players, go ahead! If you want to amass convenience stores and then boost them later, that’s your call. Players can disrupt you by stealing your coins or buying the buildings you need, but the randomness of the dice helps to keep people from dominating too easily.

Machi Koro plays from 2 to 4 players.

I’ve played a good bit of Machi Koro with 4 players, and I think this is the best range. It’s a fun two player game, for sure, but there is less competition for buildings. This means it’s very easy for a player to amass a powerful building and destroy you. With 4 players, you will run out of the easy buildings, so you have to think harder about how you can win the game. It moves fast enough that you shouldn’t be sitting around waiting for your turn, and the blue buildings that get you coins on other players’ turns also give you money more often. To me, Machi Koro feels designed to play with more, not fewer players.

Machi Koro is a great filler-type game with a little more meat than other fillers. If you read my review of Coup, you know I love me some filler games and always welcome more. Machi Koro takes about 20-30 minutes, typically, so I like to pull it out while waiting on others. To that end, yes, I’ll play this game at my next board game gathering, for sure!

Machi Koro cost me in the range of 25-30 dollars; I don’t remember the exact figure. You can get it on Amazon right now for $21, which is a great price for this game! 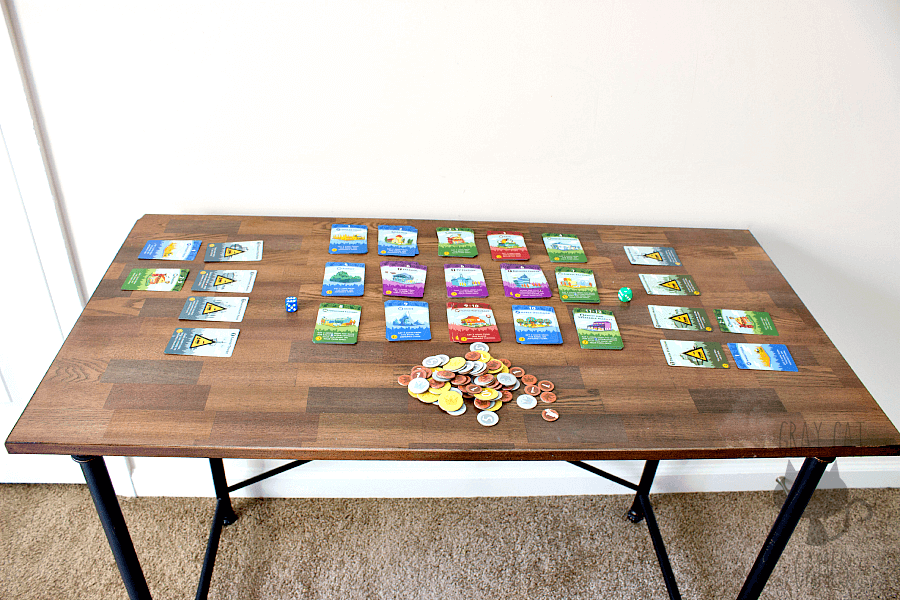 Machi Koro is a lot of fun and is very, very easy to teach. I haven’t yet encountered someone who was unable to grasp the mechanics within one turn or so. You don’t often find such a fun game with so easy a learning curve!

A lot of reviewers complain about the premade stacks, since it means the game can be “figured out.” Not enough randomness, in other words. I can understand this view, but I’ve played the game a lot, and there are quite a few strategies to explore. I have yet to feel bored because of this non-random element of the game. One fix for that issue, though, is the new Harbor Expansion, which adds new kinds of cards and randomizes which ones can be bought.

Machi Koro is a game designed for everybody. I find that the people who enjoy light games have the most fun with it. More serious gamers like it, too, but if you are more the type of person that likes throwing the dice and seeing what you get, Machi Koro is perfect for you. 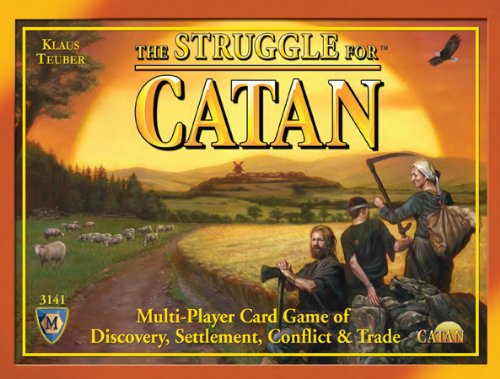 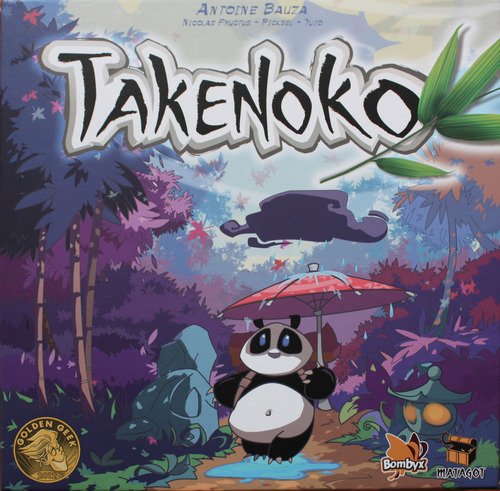 Another great review and another I haven’t heard of. Thanks for linking up with us at #AnythingGoes

I think this one might end up getting more popular in the coming years, especially if it wins the German Spiel des Jahres (game of the year). It’s one of the nominees!

What a fun sounding game. Thanks for sharing your post at the #AnythingGoes Link Party.

It’s a really neat one that fits for people who don’t play too many games as well as those who play a lot!